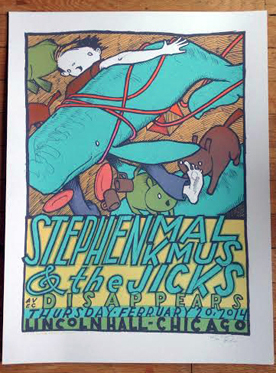 This poster, commemorating our sold out show with Stephen Malkmus & the Jicks, was designed and printed by Chicago’s Jay Ryan.

Jay Ryan learned about screenprinting from Steve Walters at Screwball Press in late 1995, where they worked together until 1999, at which point Jay started The Bird Machine print shop in the basement of his apartment building. Jay’s initial clients were his friends’ bands, his own band, and the clubs where they played. By stumbling into the right place at the right time, he fell in with a new movement of screenprinted poster makers across the country and around the world.

This is currently unavailable.