03-01-2022 Black Country New Road - Schubas Tavern || Lincoln Hall
LHST Vaccination Policy
Proof of vaccination is required for entry to all shows at Lincoln Hall and Schubas in Chicago, and to all Audiotree Presents shows in Michigan. Click here for more information on this policy for Chicago shows, and Click here for Michigan shows. 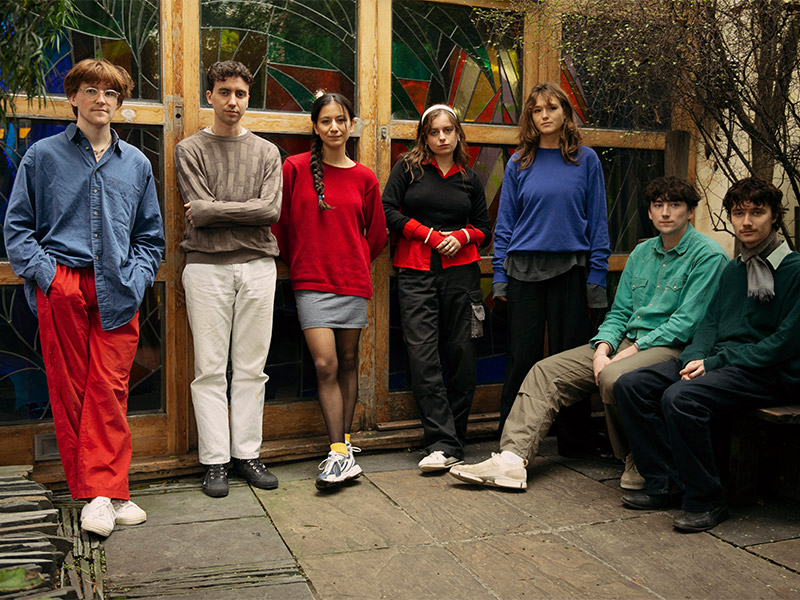 For many bands two songs is not a lot to go on. It’s a jumping off point or a sketch of what’s to come – it’s the primitive construction of a group’s artistic foundations. Yet Black Country, New Road propelled themselves far and wide from their first two offerings to the world via 2019’s ‘Athen’s, France’ and ‘Sunglasses’.

What followed was being declared “the best band in the world” by The Quietus, glowing reviews from The New York Times to The Guardian, landing on the front cover of Loud & Quiet, a live BBC 6 Music session, selling out shows across the country including 3 shows totalling 1700 tickets in London, being invited to festivals in far flung places such as Slovenia and Lithuania, scheduled on prestigious festivals such as Primavera and Glastonbury, performing with an orchestra, and finding themselves on French TV sandwiched between Sonic Youth’s Kim Gordon and Radiohead’s Ed O’Brien. Their live performances gaining legendary status among fans of the emerging scene that coalesced around vaunted south London venue The Windmill, and which gave rise to many of their peers and contemporaries such as Fat White Family, black midi and Squid, artists with whom they have variously supported, toured with and collaborated with over the years.

However, despite the band coming out seemingly fully formed and bristling with a wiry tension that merged post-rock soundscapes with jazz-inflected post-punk, their debut album manages to straddle a perfect line between this early period incarnation and their ever burgeoning evolution. “We’ve matured a lot since we recorded those two tracks,” says saxophonist Lewis Evans, who makes up the band along with May Kershaw (keys), Charlie Wayne (drums), Luke Mark (guitar), Isaac Wood (vocals/guitar), Tyler Hyde (bass) and Georgia Ellery (violin).

Those two initial singles have been re-recorded here to fit in tonally with the rest of the tracks – all of which were recorded live over a six-day period in March with producer Andy Savours. The resulting album is one that reflects where the band were as a unit after a year of heavy touring. This was a place where deft, free-flowing and intuitive playing melded with tightly coiled eruptive moments. The new version of ‘Sunglasses’ begins with buzzing and crackling guitars unfurling in almost drone-like churns, whilst ‘Athens, France’ employs space thoughtfully, unravelling as a looser groove. “We wanted it to sound exactly how we love to sound live,” says Evans.

The tweaks to the previously recorded tracks of course further enhances the connection to more recent live performances but it was also a way to sprinkle in a sense of the band’s ceaseless forward momentum. “We wanted to change some stuff musically just to get it into a shape that was more relevant to how we were playing it live now,” says Wood. “To have continuity of sound.”

Lyrics have been fine-tuned too, along with a subtler leaning towards singing from Wood, shifting from the spoken word approach of earlier material. “Speaking lyrics made sense at the time and was what I was comfortable with while learning to be a frontman,” he says. “Some things lend themselves to being spoken but there’s space for things to be sung – which feels more natural and less intense. It doesn’t always make sense for me to have this very aggressive spoken word over things – there’s room to perform in harmony with the band.”

The result captures the band’s early musical propensities, whilst also making room for their progressions and nuances. “We’ve since learnt our best asset,” says Evans. “We can play quietly. We’ve taken that and used it so it’s more dynamic. Intensity worked for us with those early recordings, like ‘oh my god this band is so intense and angsty’, but this record is a much more considered approach.”

Originally hailing from Cambridge and surrounding areas, and having played together in various guises over the years, as Black Country, New Road, they soon found they had a deep rooted sense of harmony and unity as their core foundation. Some members go as far back as being classmates at school, some would go on to live together, whilst others also went to University together. This has created a cohesive spirit and profound bond in the band that is reflected in their instinctive collective creativity. Yet despite being such a forceful unit they are also avid explorers individually. Many members play in other genre-spanning bands, have solo projects and collaborate with other artists. On top of this, the band’s background of melding classically trained players with self-taught ones also results in a unique concoction, combining precise technical skill with a raw, and often unpredictable, primal essence.

This finds the band intrinsically connected to those very early intense days whilst also heavily expanding on them. “The music was honest for the time,” says Wood. “But it’s just not necessarily honest anymore for it to be this overwhelmingly tense thing. There’s still intensity throughout the record but it’s just a very different type of intensity.”

As Wood points out, to suggest this record is void of intensity would be a disservice but it does contain a more refined intensity. This balance between tension and release, along with opening up more moments for pause and reflection, can be felt throughout. The opening ‘Instrumental’, which takes shape from Evans and Ellery’s background performing klezmer music, is bright, punchy and sprightly, whereas ‘Track X’ unfurls in gently looping melodies, rich vocal harmonies and finds the band plundering a deep sense of poignancy and tenderness. ‘Science Fair’ places discordant guitars against warm strings before erupting in a screeching cacophony of both and the closing ‘Opus’ acts as a bookend for the album, as yet another klezmer-inspired number builds to a crescendo that feels like hurtling towards the end of a cliff top. The band has essentially found a way to make silences and spaces just as impactful as noise and chaos.

Very much a collection of tracks aimed to reflect their live set, perhaps the most cohesive thread to be found running through the album is an approach to honesty. The band had to stop themselves running too far ahead in order to document this album in a way they felt was as truthful as possible. “This is representative of our first 18 months and then we’re going to put a stop in the road,” says Wood. “I’m interested in a really honest portrayal of what a band is. It’s nice if people can see an artist’s phases and they’re quite clear and honest about their genuine progression as people and musicians.”

Even though Wood tweaked pre-existing lyrics that too was a balancing act between authenticity and evolution. “I edited things to a point where I was happy and comfortable with them but I made a conscious effort not to get rid of every line that I didn’t like because these songs have to be at least in some way honest.”

Ultimately the album is the perfect capturing of a new band and all the energy, ferocity and explosive charge that comes with that whilst also clearly the work of a group who have no interest in repetition, one-note approaches or letting creative stagnation set in. For the First Time is a sonic time capsule that somehow manages to bottle the past, the present and the future.