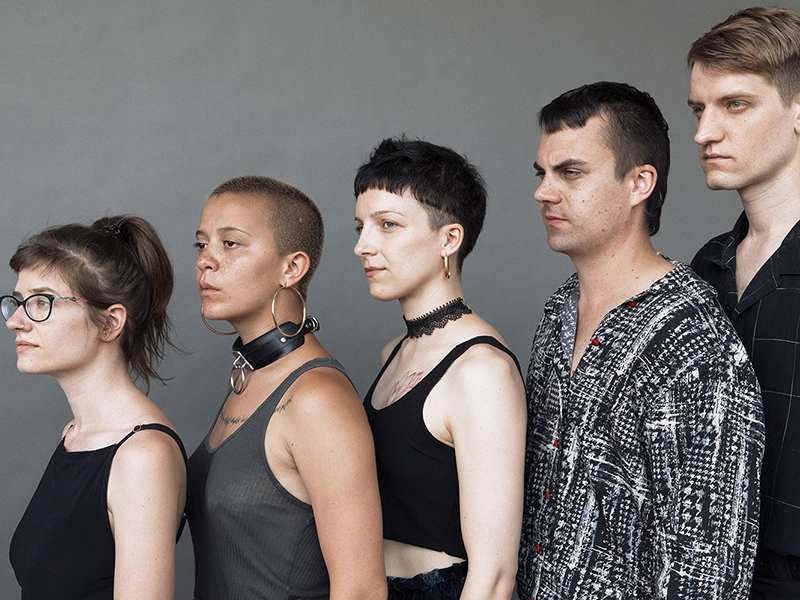 ‘The best critique is self-critique’ is the mantra of Brooklyn art rock unit BODEGA. With wild minimalism and sharp wit, they revitalize the rock and roll vocabulary under the influence of post punk, hip-hop, kraut rock, and folk-derived narrative songwriting.

Still on the endless tour behind their debut LP ENDLESS SCROLL – Ben Hozie (conductor, vocals, guitar), Nikki Belfiglio (art director, vocals, samples, hi hat), Heather Elle (bass), and Madison Velding Vandam (lead guitar, producer) have recently recruited Tai Lee (formerly a performer/drummer in the show STOMP) as their new stand-up percussionist (original drummer Montana Simone has left to pursue her painting and sculpture). The art rock group has written and recorded a whole new batch of material w/ Tai (produced by Madison) that will be released soon (form yet TBD). Audiences can expect teases of this new material at the group’s shows this Winter and Spring.

On March 1 What’s Your Rupture records will release WITNESS SCROLL, a live album recorded May 2018 at the Poetry Club (Glasgow) and the Lexington (London). Raw and cathartic, the record showcases the spontaneous electricity of their live sets – including extended renditions of live staples ’Truth is Not Punishment’ and ‘Can’t Knock the Hustle.’ Also on the disc is the new track ‘No Vanguard Revival’ and a re-worked version of ‘Stain Glaze’, originally a song by Ben and Nikki’s old band BODEGA BAY.

WITNESS SCROLL was mixed and mastered by Jonathan Schenke.