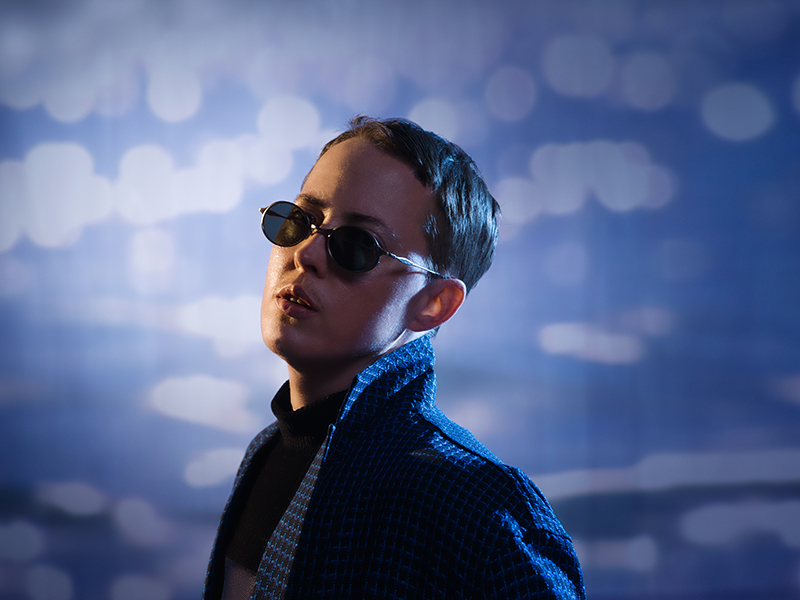 Lower Dens
The Competition, the fourth album from Lower Dens, is a pop album with a concept both emotionally and politically urgent. The title is lead singer and songwriter Jana Hunter’s term for a sociopsychological phenomenon that, in different ways, binds us all. Modern capitalism by nature generates a kind of psychosis — an inability to process its constant stimuli and contradictions — that accelerates our insecurities and anxieties to the point of total overload, corroding our intimacies, our communities, and our senses of self. The Competition speaks, in various ways, to the necessity of “socially de-conditioning ourselves and learning how to be people,” Hunter says. “The issues that have shaped my life, for better or for worse, have to do with coming from a family and a culture that totally bought into this competitive mindset.”

Ranging in scope from the very personal to the expressly political, each song is linked by a theme that expresses the vital connection of one to the other. (In “Young Republicans,” right-wing monsters consume human flesh just as the wealthy cannibalize the lower classes; opener “Galápagos” gets at the miracle of creative self-sufficiency in the absence of material resources.) The lyrics are steeped in humor and visceral, sometimes grotesque imagery: “I stood there stupefied by your pretty face/And spitting blood onto your shirt and your pretty face/I said I might love you,” Hunter sings in “Buster Keaton.” In “Empire Sundown” — about overthrowing the plutocrats — they sing, “Look them in the eyes when they push you/Off the raft and make them watch you drown.”

Hunter was born in Texas, one of eight children in an insular, repressed Catholic family. In the early 2000s Hunter moved to New York, where they released two critically acclaimed solo records on the indie label Gnomonsong, started by Devendra Banhart and Vetiver’s Andy Cabic. These were sparse, introspective works, part of the artist’s overall effort to make sense, in a way, of who they were and where they had come from. In 2007 Hunter relocated to Baltimore, excited about its music and community. Forming Lower Dens was part of a conscious decision to make music within a social context. (“Why can’t we be with the ones we were made to love?” Hunter sings on “I Drive,” which expresses the seeming impossibility of feeling as though you belong anywhere. “I live as instructed/No way through/No place in me for you.”)

The band’s first three albums — Twin-Hand Movement, Nootropics, and Escape from Evil — formed a narrative of sorts, about finding community, and identifying one’s responsibilities. This trajectory was interrupted by personal crises including frustrating battles with mental health. “In the last two years it started to have more and more of an effect on my life,” Hunter says, “until I finally found myself unable to really function. Very scary thought, very scary feeling, to know that you might not be connected to what’s really going on.” At the same time, Hunter was and is still undergoing a gender transition they had been deferring for many years. “I repressed the idea for a long time,” Hunter says, “but I’ve been going through both medical and social transitions, from living as a woman to a non-binary person and now more toward the other end of the binary.”

Musically, Hunter’s tastes have always been expansive (they cite serpentwithfeet, Hand Habits, Travis Scott, Faten Kanaan, and Elon Battle, aka :3LON — who appears on feature “I Drive,” as well as three other songs on the album — as some current favorites). Prior to writing this album, Hunter and bandmate Nate Nelson exchanged Pierre Schaeffer’s In Search of a Concrete Music as well as Hermann von Helmholtz’s On the Sensations of Tone. These books inspired them to try layering recorded sounds, performances, midi and synth instruments in walls of sound. The result is a pop album that unifies theme and feel, and swallows you up: The songs are dense with guitars, drums, bass, and synth, but also accordion, French horn, trumpet, bassoon, and flute.

Hunter studied Western classical music growing up, “but I was wild and in a lot of pain, and it didn’t really touch that. What did, especially as a very young person, was pop — a spectrum ranging anywhere from Prince to Anne Murray. Home life was very bleak, and pop songs were a guaranteed escape to a mental space where beauty, wonder and love were possible. I wanted to write songs that might have the potential to do that.”

Escape is, in the best examples, productive — that emotional immersion is meant to liberate. The message a pop song conveys can be as simple as unbridled heartbreak, or speak to something more complex, with higher stakes, yet just as familiar. The Competition connects the psychosis of modern capitalism with the difficult, lifelong work of loving other people, and its love songs — romantic, self, collective — refuse to dilute or sugarcoat the challenges of intimacy. Deceptively simple, these layers of sound crystallize emotions in the hard-to-reach ranges beyond certainty. As Hunter sings on “In Your House”: “You are heavy and you carry the weight of living/That’s what beauty is.”

The Competition draws on influences ranging across decades of Western pop music and chronicles messy, vulnerable humanity at a time of upheaval and chaos — through immersive, four-minute songs meant to give pleasure as much as provoke self-examination. It channels an urgent, restless desire to connect. “My voice is gonna be different when I perform these songs than it was when I recorded them,” Hunter says. “I’m equally terrified of and excited by that, but I always want to be more myself onstage, to reach people.”

“What we’re talking about on the record is there’s a disease we’re all suffering from, and it steals meaning from our individual lives, and robs us of our ability to connect with one another. And we have to let it go, if we want lives that mean anything.” The album gets at the importance of situating oneself within a broader social context, especially in times of political emergency and great possibility, where the necessity of organizing feels more widespread and inspires more passion than it has in years. It also expresses an epiphany: you need radical and unquestioning compassion for yourself if you’re to reimagine what society could be.

:3LON
:3LON (Elon Battle) is an autodidact singer/songwriter/producer based in Baltimore, Maryland, specializing in electronic soundscapes as well as multimedia.
:3LON explores themes that examine the state of humanity through a futuristic lense with nods to classic anime and fantasy rpg.
:3LON has completed three one month long nationwide tours and has shared bills with respected and up and coming artists such as Tokimonsta, Oshun, and Abdu Ali.
They released their debut EP “RONIN” back in the spring of 2016 and has since been gearing up for another release via Halcyon Veil.
THIS SHOW IS AT Lincoln Hall