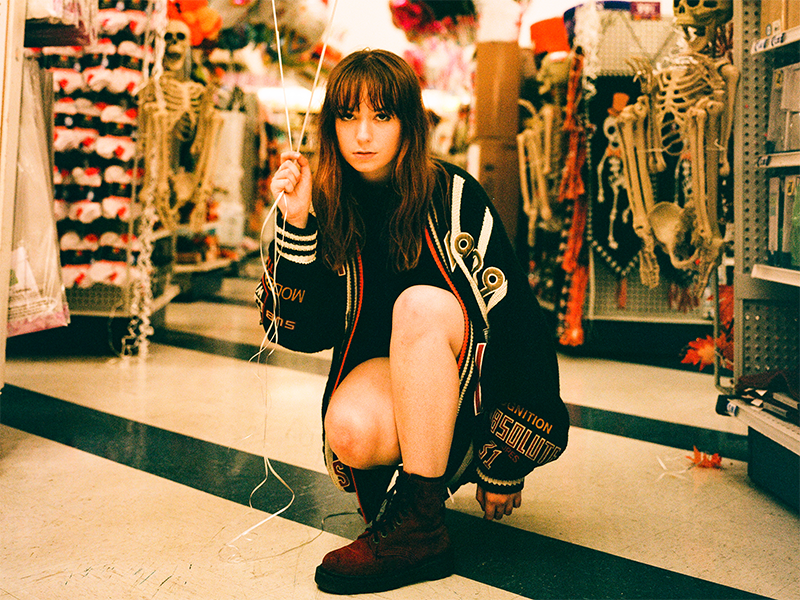 Jordana’s mission is simple: keep trying to be her, even when it’s hard. So it’s no surprise perseverance and self-discovery are central themes on her debut studio album, Face The Wall, due May 20th on Grand Jury.

“The album title has a few meanings to me. Mostly, it’s about not giving up,” says the 21-year-old polymath (she sings, she writes, she plays everything, she produces). “The wall can be anything in your way. The album is a sort of reminder to myself that I have to face those things, and I can’t take the easy route and turn around.”

When asked about the origins of that ethos, Jordana looks back on two decades of life scattered with realizations that helped crystallize the idea that would become the central theme of her new record.

“It can be something as simple as realizing I wanted to go vegan, or that it didn’t matter that I liked both girls and boys. Or it could be something as complex as God,” she says moving into a conversation about the Maryland church her family attended as a child. “It was a big part of my upbringing. I really tried to reconcile that with my identity as I started to mature, but I got older and realized it just wasn’t me. I had to face that fact.”

But carving her path — being who she wasn’t in order to find out who she actually was — is part of what Face The Wall (“and life!” Jordana points out) is all about. “I don’t know if I would have found the violin if I didn’t have that church part of my upbringing,” Jordana wonders aloud, tossing off jokes about how the experience of watching someone playing at her church would eventually turn her into an “orchestra rat,” or how it led her to busking on the boardwalk of her town of North Beach, Maryland as a 13-year-old. “”Yeah, it’s not like playing in front of an open violin case on a street bench prepared me for touring or anything, I just knew very early on that I loved performing and playing music for people.”

But Jordana didn’t find herself on stage until she truly found herself on an iPod Touch, where she cobbled together homespun pop songs on a GarageBand app in her bedroom that catapulted her to where she is today. Since debuting that first bedroom pop single “Jackie’s 15” on Bandcamp at 17, Jordana’s amassed a legion of online followers and fans, collaborated with a fellow rising stars like the producer MELVV, Magdalena Bay, and TV Girl, and landed a contract with the NYC mainstay indie label Grand Jury.

In 2020, she released a slew of singles and two EPs, Something to Say and To You, during a year in which most artists found themselves flailing under lockdown. But despite all of her success, the future didn’t gleam as brightly as promised: relationships dissolved, she moved across the country alone, and the world got pretty depressing for everyone. So, while Face the Wall is Jordana’s most confident and kaleidoscopic album to date, it’s also a direct confrontation with the self that traffics in catharsis over pathos, empowerment over defeat.

On standouts like “Go Slow,” Jordana reflects on her ability to take a step back to analyze emotions and overcome, acknowledging the alienation she experiences as a working artist who just relocated to NYC. “I could lose another race/ I’ve been living life in record time,” she sings on the chorus, her voice airy over a heavy, earthbound drumbeat and ascendant piano progression that recalls Death Cab For Cutie’s Plans, an album Jordana remembers listening to in her mom’s car growing up. Her influences linger in that childhood space, when Coldplay and The Strokes graced the radio and Grizzly Bear showed her that a band can shapeshift from one album to the next, never settling in a comfortable groove. “I admire that versatility; it’s what I aspire to.”

Indeed, Face the Wall’s greatest strength is its unpredictability. The album opens with “Pressure Point,” a spare pop song that has more in common with artists like Charli XCX or Caroline Polachek than Jordana’s indie forebears. A spindly guitar breaks beneath an electronic drumbeat as Jordana narrates a weed-induced panic attack. “Can’t help but breathe the ambers in/ New town, but with the same old shit again/ In the company of distant friends,” she sings, her voice lurching from verse to verse, the song’s form following its content. “‘Pressure Point’ is about acknowledging limits and knowing when it’s time to stop,” she says. “I wrote it with producer Cameron Hale, who’s credited throughout the album, and MICHELLE’s Charlie Kilgore. They helped me tell this story.”

The relationships Jordana’s made with other musicians wouldn’t have been possible without social media, where she met the people she now counts as close friends and collaborators. “I’ve been on Twitter and Instagram since I was 12 or 13 and have met a lot of people just by being online, including lasting friendships made through my Strokes fan pages,” she says, laughing. “It’s weird to take a step back and analyze how you got somewhere. I met some people on a website, moved to a different state, made a lot of lifelong besties, got a tour offer from one of my favorite bands (TV Girl), signed a deal, moved to New York, and now I’m about to tour on my own to promote an album with a producer I worked with in LA.” When her management team reached out via DM, Jordana worried it could’ve been a scam, but when they flew her out to New York from Wichita to meet them, she knew she was, in her words, “living the dream.” “Twitter can be a cursed place,” Jordana says, but she loves it for what it gave her: a community.

Many of the songs on Face the Wall balance on that knife’s edge between pleasure and terror, joy and implacable sorrow. The impossibly catchy “Catch My Drift” chronicles the dissolution of a blossoming romance and is the closest to a rock song the album has to offer. It starts with a watery guitar riff comparable to the Cure, but by the time the bridge hits, Jordana transports the listener back to Warped Tour circa 2006, where pop-punk reigned and the air filled with snide dismissals of former lovers. “It’s about the ache that comes when you really like someone and they just stop talking to you,” Jordana says, no further explanation required. At the bridge, she reassures herself, “Ohh woah! I’d hate to say I told you so/ Ohh woah! It’s no mistake to be alone.”

While the lyrics on Face the Wall seem to be hellbent on self-betterment, the instrumentation and production proves that Jordana’s talent is big enough to buoy her nascent career. Though her earliest songs were self-produced, she unearths new possibilities in collaboration and working alongside friends on this album made the experience of mining these ideas a little less lonely. “My work ethic has gotten so much better, and I’m grateful for that,” she says, acknowledging that sometimes you need someone else to help spark inspiration.

“To the Ground” speaks to those bad days, when every waking moment feels like a chore, when giving up isn’t an option because you haven’t even tried. “If you could maybe/ Throw me to the ground/ Make me feel alive/ Don’t say I’ll get found/ I’ll do it myself/ Find a light,” Jordana sings on the chorus over the crash of a cymbal and a coiling guitar riff that sounds-off to ‘90s alt-rock classics. That resolution, to seek out the slivers of light in the dimmest corridors, makes Face the Wall a triumphant album, one Jordana considers the apex of her career thus far. “It’s hard to even think that I could write something better than this in the future, it feels like my best work,” she says, a bit nervously, then pauses for what feels like a full minute. “But I’ll figure it out. Even if it’s hard.”