09-23-2021 Young Man In A Hurry - Schubas Tavern || Lincoln Hall
LHST Vaccination Policy
Proof of vaccination is required for entry to all shows at Lincoln Hall and Schubas in Chicago, and to all Audiotree Presents shows in Michigan. Click here for more information on this policy for Chicago shows, and Click here for Michigan shows. 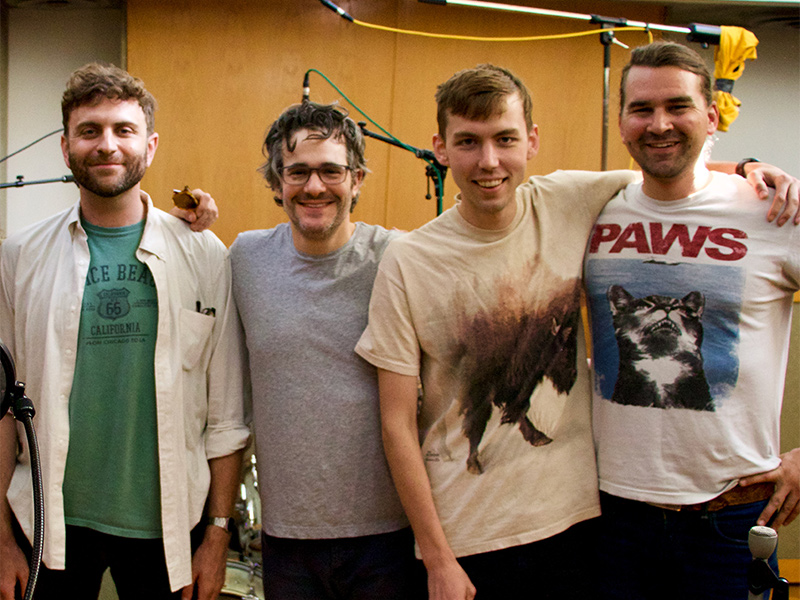 Young Man in a Hurry

APPLY CODE
ADD TO CART
A band born of friendship, and undeniably built in Chicago, Young Man in a Hurry reimagines all the lo-fi substantive sounds of their 80s and 90s youth in a kind of post-modern millennial séance. The group sprung from a patient/doctor relationship between songwriter and frontman Matt Baron and drummer Meyer Horn. The band evolved into a full-fledged four-piece after inviting bassist Nick Harris and cellist Teddy Rankin-Parker to join. YMIAH’s collaborators include a bevy of indie rock’s best musicians spanning David Vandervelde (Father John Misty), Jon Graboff (Willie Nelson, Norah Jones), Ryan Keberle (David Byrne, Sufjan Stevens, St. Vincent), Ohmme’s Sima Cunningham and Macie Stewart, and producer Brian Deck (Iron & Wine, Modest Mouse). Guitarist David Taylor rounds out the band’s live show line-up.Deck says of working with Young Man In A Hurry: “As I spoke with Matt and started rehearsing with his band, it became clear that something special could come of this project. His lyrics were impressionistic but not vague, kind of psychedelic but grounded. His song craft is traditional but a little askew and his influences were obviously varied and interesting. I am very proud of all of us who helped make this record so beautiful and powerful and compelling. I hope you enjoy it and that it reveals new things with each listen.”

This show celebrates the release of their debut album, called Jarvis. The LP is named after a man Baron calls “the kindest person I’ve ever met” and the owner of his 120-year-old residence. “He bought the house in the 90’s when the area was desolate. Now, Google’s Chicago office and million dollar condos are a stone’s throw from his front door. He’s cool without trying to be, in evergreen ways like his unchanging interests in classical music (he only listens to WFMT radio), leather shoes, 501s, Hermès ties, and bacon.” For Young Man In A Hurry, Jarvis is a real person and friend, as well as an infinite symbol of unconditional love, timelessness, and unfazed joy — themes naturally central to a record now his namesake.