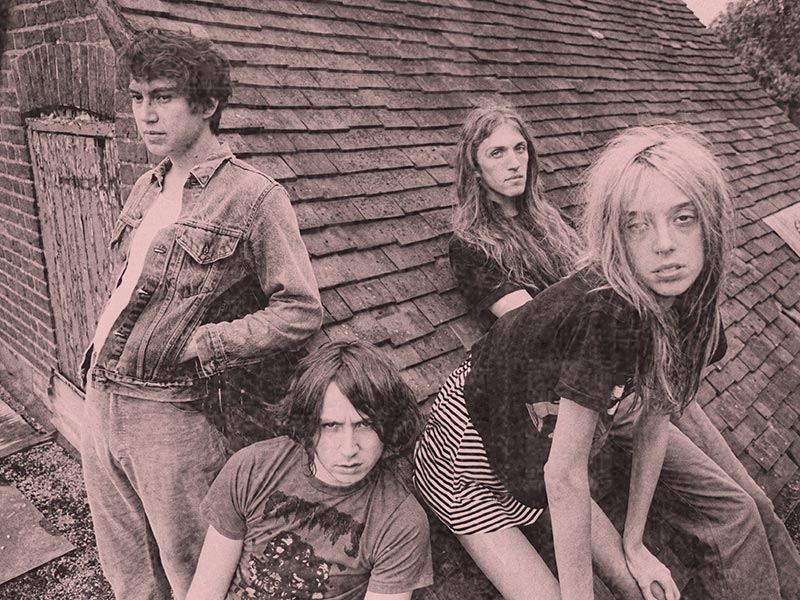 Born on the streets of Los Angeles, Starcrawler is a band possessed by the spirit of its own hometown, every movement charged with a manic electricity. Since forming in 2015, vocalist Arrow de Wilde, guitarist/vocalist Henri Cash, bassist Tim Franco, and drummer Austin Smith have gone from bashing out songs in the garage to winning the love of such legendary artists as Shirley Manson and Elton John. They’ve also opened for the likes of Beck, Foo Fighters, Spoon, The Distillers, and MC5, bringing their unhinged energy to an already-fabled live show—a spectacle that’s simultaneously lurid and glorious and elegant as ballet. On their sophomore full-length Devour You, Starcrawler captures that dynamic with a whole new precision, revealing their rare ability to find a fragile beauty in even the greatest chaos.

Produced by Nick Launay (Nick Cave & the Bad Seeds, Yeah Yeah Yeahs, L7), Devour You takes the feral intensity of their 2018 self-titled debut and twists it into something grander and more gracefully composed. With its more elaborate and nuanced yet harder-hitting sonic palette, the album came to life at the famed Sunset Sound, where the band spent their downtime playing H-O-R-S-E at the basketball hoop and drinking lots of Mexican Cokes. Adorned with so many unexpected flourishes—choir-like backing vocals from a local Girl Scouts troop, tuba and trombone riffs courtesy of Cash (the band’s 18-year-old musical polymath)—the result is a selection of songs radiating both raw sensitivity and untamable power.

Heavy and swinging and brutally catchy, “Bet My Brains” shows the psychic kinship at the heart of Starcrawler’s songwriting. “That song came from thinking about the mole people in New York and Vegas and the Catacombs in France, and the underground village of people who live in the sewers of the L.A. River,” says de Wilde. “I was fascinated with the fact that there’s whole other world happening right under our feet.” Cash adds: “Arrow and I hadn’t even talked about it yet, but I’d already written something about the same thing—about how these people’s eyes adapt to pitch-blackness, and they end up going crazy from never seeing the sunlight.”

Elsewhere on Devour You, Starcrawler drifts from the dreamy piano lilt of “No More Pennies” to the rock-and-roll disco of “You Dig Yours” to the pure punk vitriol of “Toy Teenager” (a song about de Wilde’s refusal to be abused the fashion industry, and about how “people look at my body and just want to put me on a platter”). And on “Born Asleep” the band lets their love for country music shine, slipping into a modern-day murder ballad spiked with pieces of hazy poetry (sample lyric: “I remember when you cut your lip, sippin’ on a soda can/And the time when you fell and tripped, screaming at the ice cream man”).

Elsewhere on Devour You, Starcrawler drifts from the dreamy piano lilt of “No More Pennies” to the rock-and-roll disco of “You Dig Yours” to the pure punk vitriol of “Toy Teenager” (a song about de Wilde’s refusal to be abused by the fashion industry, and about how “people look at my body and just want to put me on a platter”). And on “Born Asleep” the band lets their love for country music shine, slipping into a modern-day murder ballad spiked with pieces of hazy poetry (sample lyric: “I remember when you cut your lip, sippin’ on a soda can/And the time when you fell and tripped, screaming at the ice cream man”).

All throughout the album, Starcrawler taps into the kinetic chemistry they discovered soon after forming—a process Smith describes as a “slow-burning candle of finding the right people to play with.” In assembling the band, de Wilde first contacted Smith after seeing a Facebook photo of him playing drums (“I hit him up and he came to my birthday party, and then he turned out to be a really good drummer,” she recalls. “Right away it was like, ‘Jackpot!’”) In searching for a guitarist, de Wilde next approached Cash, a fellow student at her performing-arts high school in downtown L.A. “I saw him one day and thought, ‘That guy looks cool,’” she says. “‘He’s carrying a tuba, he’s got long hair, I’ve seen him wearing Cramps T-shirts: he’s gotta know at least something on guitar.’” But while Cash has since emerged as a monster guitarist, her instincts were only partly right. “When I was younger I didn’t want to play guitar, I wanted to play the drums because my dad played guitar—although sometimes I’d take a broomstick and jam along to AC/DC live footage,” says Cash. “It wasn’t until Arrow hit me up that I realized it was meant to be.”

Starcrawler then finalized their lineup with the addition of Franco—an old friend whom de Wilde reached out to after a moment of strange serendipity (“I was in the car with my mom and stressing out about finding the right bass player, and then Tim and his brother turned out to be on their bikes right in front of us,” she says). With their early band practices mostly consisting of Runaways covers, the band quickly bonded over a shared love for L.A.’s most unglamorous spaces. “I’ve been obsessed with Hollywood Boulevard ever since I was little,” notes de Wilde. “People travel so far and spend so much money to see it ’cause it makes them think of Marilyn Monroe—when in reality it’s so disgusting, which is why I love it. But really a lot of the L.A. that I grew up with and reminisce about is kind of fading now.”

As an antidote to the toxic mildness overtaking so much of the city, Starcrawler’s live show has only become more outrageous over the years, an element strengthened by their increasingly telepathic connection. “We all know each other in a much deeper way now,” says Smith. “Like, Arrow knows exactly when I’m going to hit the crash cymbals, so she moves to match up with that. It’s completely changed how we play together.” Prone to spitting fake blood and slapping phones from the hands of crowd members, de Wilde has proven to be a once-in-a-lifetime performer, captivating enough to command a room with just the widening of her eyes. “We want to put on a real show and give people some kind of escape from all the shit going on in the world,” she says. “And with the album, I want people to put it on and feel excited, and hopefully get goosebumps. I always want there to be a dramatic response.”