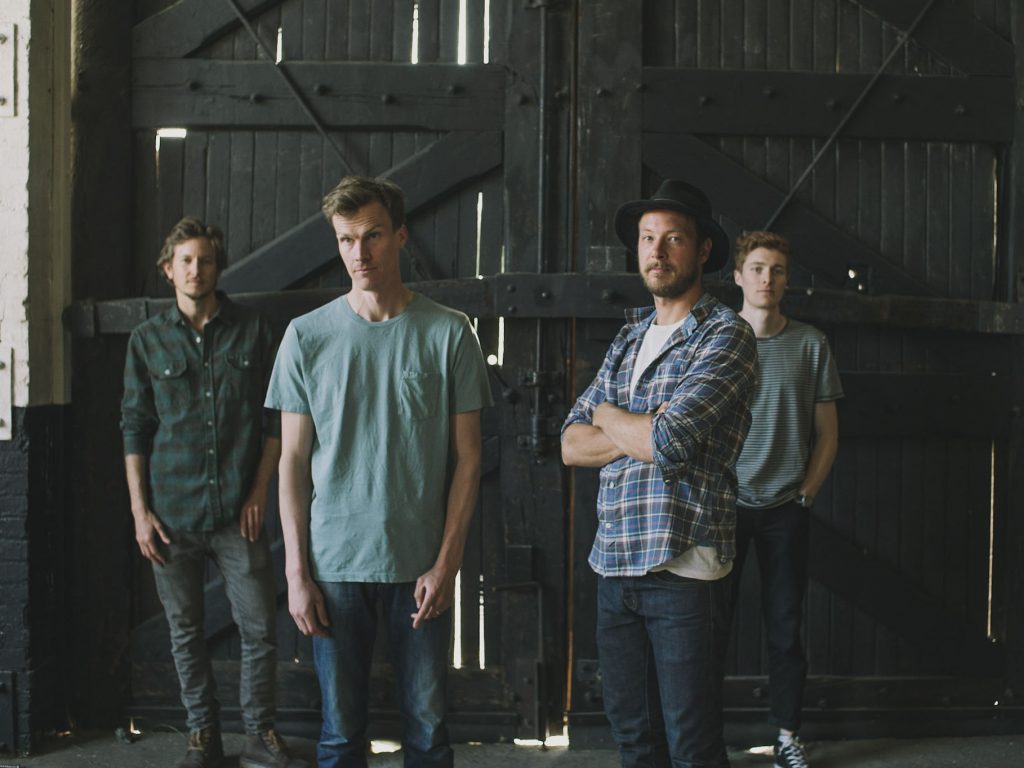 Current Swell are done with talking.

“If this is our time, why don’t we take it?” singer Scott Stanton sings on Current Swell’s newest album. “If this is our life, why would we waste it talking the night away?” The band have been talking for almost a decade, now, and — make no mistake — talking well at that.

And people have been listening intently for just as long. After winning the (102.7 FM) Peak Performance Project in 2011, fans all across the world took notice of the Vancouver Island-based band and their West Coast rock sound.

The band’s success has been based off their ability to talk in profound and uplifting ways, whether about unconditional love (“Young and Able”), the cycle of life and death (“When To Talk and When To Listen”), or fame and success (“Keys To The Kingdom”). Their talking has led them to sold-out tours in North America, Brazil, and Europe, with thousands of tickets sold across four continents and well over 50 million streams worldwide.

But now, Current Swell say, the band is finished with talking. Why talk, anyway, when you can shout, stomp, and sway?

Swell do all of the above on their latest album, and the result is a piece of work that roars with energy and bristles with the sound of a band making music that they love. This energy is nothing new for Swell. For as long as they’ve played music, it has been manifested in their breakneck and bombastic live performances that have thrilled audiences from Austria to Australia, Seattle to São Paulo, and everywhere in between.

And now that relentlessness is translated into their recorded work. Songs like “High Life” and “This Is Our Time” are powerful, driving rock anthems, and even slower songs like “Bring It On Home” and “Gone From Me” still pulse with melancholic importance. Just because Swell are done with talking doesn’t mean they don’t have anything to say.

Ironically, the recording process has been anything but relentless. The album, produced by Colin Stewart (The New Pornographers, Yukon Blonde, Dan Mangan) with Current Swell and mixed by Gus Van Go (The Stills, Arkells, Sam Roberts), was recorded a few
days at a time, in fact, with weeks and months between each session. The time between has been spent on writing, listening, and re-writing each cymbal crash, guitar chord, and keyboard line. As a result, the album has a special kind of cohesive energy. The energy is assured and comfortable, but as far from complacent as you can get.

Current Swell have spent their time building up energy, buoyed by the return of founding member Louis Sadava on bass and the fact that they’re making music that they like. It’s easy to hear it in the tracks. It’s impossible to listen to “Buffalo” and not smile and tap your feet, and you can tell the band felt the exact same way in the studio.

Renewed and rejuvenated, Stanton, Sadava, Lang, and co. are stepping into the expectations of a new album and a new tour with a hard-earned confidence and a well-worn grin.

This is Current Swell’s time, and they’re taking it.

Carmanah – Never one to shy away from speaking her mind, Laura Mina Mitic will always be the last one to tell you about herself. Instead you’ll hear about music, band mates, politics, touring and a deep reverence for humanity and the earth. You’ll hear the same on Carmanah’s first national release ‘Speak In Rhythms’, a modern eleven-song album that overflows with emotion, afterhours cool, groove and tantalizing hints of gritty vintage flavours that influence it’s modern sound.

It was during the six-week sessions that made up the bulk of the recording at Vancouver’s Warehouse Studios that producer Gus Van Go coined the band’s sound ‘West Coast Soul’. Having produced The Arkells, Sam Roberts, Fast Romantics, Wintersleep, Whitehorse and more, Gus along with co-producer Werner F set about showcasing Laura’s soulful lead vocals with a complement of strong harmonies, rich acoustic layers, multiple lead instrumentation all powered by a deft and driving rhythm. The result is a soundtrack that shimmers, dark and brooding at times and shining boldly in others, with lyrics that rival many of the great songwriters of our generation.

The story of the band has never been about commercial success or hurried compromise. Instead, the human condition stands as an enduring theme, Laura’s writing a reminder of global issues and the current political climate. Poignant lines from the album reveal this: ‘Hunt and gather/ in a frozen desert./ Bless my heart and curse your soul./ Standing smitten/ by a burning bridge/ the river fled long ago’.

There is also much in this album that celebrates love and connection: ‘Oo, if I go I/ know
you’ll join me/ and point out routes along the way./ Oo, if you fall I will/ lay down beside
you/ and we can trace the Milky Way’. Always thought provoking, Laura’s imagery evokes a
gentle and calming mood that is often easily lost in a frenetic modern world.

At home on Vancouver Island, Laura and the band have built a large and enthused fanbase,
selling out bigger venues and opening stages for international acts like Ziggy Marley, Clinton
Fearon, K.D. Lang, Moby and Shakey Graves. Off the island, on their travels both near and
far, and consistent with their values, the band lessens their ecological footprint by fuelling
their tour vehicle with used vegetable oil procured from restaurants along the way.

Laura might be the last person to talk about herself, but increasingly others are doing so
without hesitation. Carmanah was mentioned as a “BC musician to watch out for” by
Vancouver’s Daily Hive. The Zone 91.3’s Jon Williams has called her, “the Stevie Nicks of our
generation.” Times-Colonist reviewer Mike Devlin touted her opening act for K.D. Lang as a,
“solid six-song set highlighted by some impressive vocal runs and nifty acoustic guitar
work.”

So, when presented with the opportunity, join in and be part of the experience. This is the
beginning of a long journey, one that seeks to create a soundtrack for a new listener. This is
music, this is love.